Yayyy we finally rode a hundred miler! There were a couple days when it was within our reach but it slipped away. As you may recall we have our 100 mile challenge going so we were especially pleased.

A century ride, a new state and a new map. Plus we had a real salad for lunch, as we were treated by two ride angels, Tom and Chris.

We finally finished about 8:00pm and were welcomed by Fr. Odo at Assumption Abbey where this Benedictine monastery radiates the ministry of hospitality.

And Fr. Claude you made us laugh! Yes Jim there are some Notre Dame fans here! 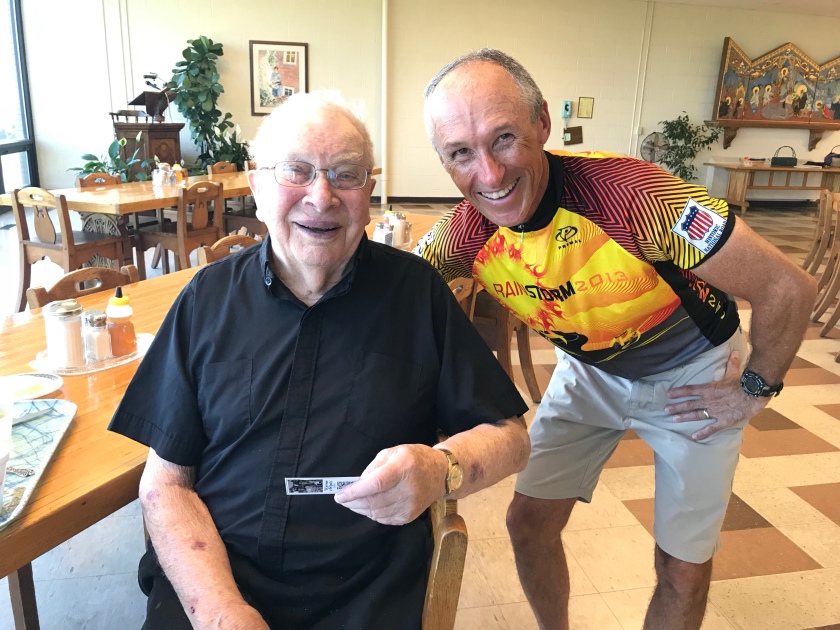 Although I don’t normally single out vids I thought these two were worthy of doing so.

Here’s Tom and Chris Hong (excuse the orientation of the vid) as they mix the dulcimer and mandolin. Yep they’d just finished mountain biking and stopped into the bike shop in Medora shortly before us. Here’s what we walked into:

If anyone wants to know how to power through 3,000 feet of elevation increase, 100 miles on a heavy bike with about 40 pounds of gear pizza is the answer.

When we finished the day before in Wibaux the only open restaurant was the Tasty Hut. We both bought pizzas but Tom saved some of his and put it in a to-go box on the back of his bike. All day long he kept snacking on it.

This was such a full and eventful day and Tom has thoughtfully articulated it. Grab your fave bevvie… maybe even a cinnamon roll, some popcorn or beer nuts – you will need a bit of time.

But several times this trip I look back on the day and noticed I might have cut that conversation a little short or did not stop to take that picture just to keep going and meet that goal. Each morning I start my first 10-15 miles with prayer. I have been ending these prayers asking that I can slow down and smell the roses and keep the spiritual antennae up for opportunities God has given me during the day.

Today God definitely answered my prayers. I had just finished my prayers when Gay approached riding westward following the Lewis and Clark trail. We had a great conversation. I didn’t cut it short and listened with total interest as he told us about his ride, retirement, etc.

A mile later here comes another rider, Danny who was also riding westward. Once again I thoroughly enjoyed hearing about all his experiences and he told us about the abbey he stayed at in Richardton.

A few miles later we entered the town of Sentinel Butte and we roll up to the gas station and look into the front window to see a group of locals sitting around the table drinking coffee. We walk in and Rick pours Deb and I a cup of coffee. He had homemade cinnamon rolls with homemade icing to spread on top.

We grab a seat join and into to the conversation. Another great opportunity to smell the roses and a great conversation with the locals. During our conversation we discussed BoMF and St. Vincent de Paul. Marceola reached into her purse and handed me a $10 bill. 😁

We ride out of town and a few miles later on top of a butte I look up and see a cross out in the middle of nowhere. Right then I get this wonderful feeling and it hit me that God is talking to me with these wonderful conversations I have had this morning. The remainder of the day was just more of the same.

We ride into Medora and want to stop by the bike shop that multiple people mention is super cool. We walk in and a couple, Tom and Chris, are playing music 🎶. Deb has a nice conversation with them while I add some air to our tires.

Later we were having lunch in Medora and Deb mentions if we ride to the Abbey we would be close to 100 mile ride. That would be another 52 miles from that point. We look for our waitress to settle our bill when the couple we met at the bike shop comes over and tells us they paid our bill. From that point on I can’t believe the energy I had.

As we rode into Richardton at mile 98 I felt like I could have ridden 50 more 😁.

Sometimes it takes time to strip off the layers that have been built up over the years. I lost a lot of those layers today I believe this is the true beginning of my bike ride today. I am typing this while sleeping in the Abbey.

I can only imagine what tomorrow will bring. 🙏🚴‍♂️🚴‍♀️

19 thoughts on “#acaNoTier Wibaux to Richardton, 100 Miles | A Century Ride!”