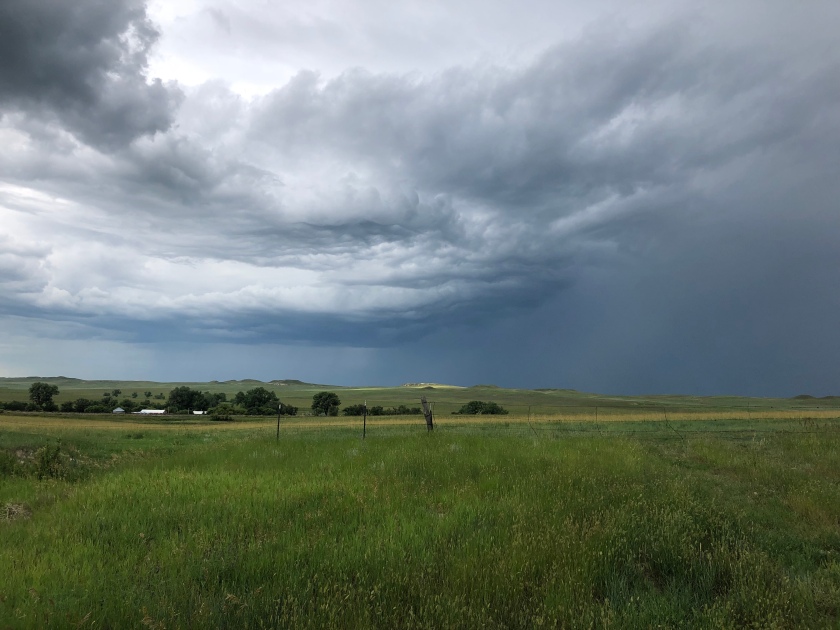 As we looked out the tent at 5:30am this morning and saw dark clouds approaching, we jumped out of our sleeping bags and hustled through our morning chores. We jumped on our bikes and headed east towards our destination of Wibaux, 77 miles. At about mile 10 the skies surrounded us with winds, thunder and lightening. Although there was no shelter we pulled off to the side of the road, got prepped for rain, and found a place to sit to let the lightening pass. Ten minutes later we were on our way riding in a light shower until we reached Lindsay.

After visiting with Ed in the Co-op over a cup of coffee, we were back on our way east. The sun was back out and the tailwind was 10mph with a slight downhill into Glendive 25 miles away. We pulled into Glendive one hour later. Several times I looked at my Garmin and saw 27mph 😁👍.

Needless to say, this was a Nirvana for bike riding. So here we are 11am with 49 miles under our belt. Yes a century ride was definitely on our mind and we pulled out the map to check on potential camping/hotels in 50 miles. We would need to ride an additional 70 more miles to have a place to stay the night. Not out of the question since we were feeling so good.

On we went after a snack for another 25 miles to our original destination of Wibaux feeling so good. That feeling quickly disappeared after 5 miles. We merged on to a major highway (I-94), which was actually really nice, then we exited to a frontage road for 12 miles. How do I describe this road?

Chip and seal, major cracks every few yards that sent shocks up your hands/elbows/shoulders every time you road over one. The wind had disappeared and I looked at my Garmin and it read a temperature of 103 degrees. Yes a very, very long 12 miles and the 100 mile century ride left my mind as well as my positive attitude.

When we arrived to the next town, Wibaux We rolled into Wibaux I definitely needed a Snickers Bar. We roll into the Tastee Hut and Deb orders a 12” pepperoni pizza/lemonade and I a 12” chicken, pineapple pizza with Rhubarb Milkshake (yum, yum). With our tummy’s totally satisfied, we headed to our campground to set up our tent, shower and get organized.

We met another Northern Tier thru-biker camping at the site, Paul from New Zealand. He filled us in on all his adventures of mountain climbing, hiking and bicycle touring. He has done four long tours with his longest circumnavigating the United States. It took him 10 months. His route: LA to SanDiego to Key West to Virginia to the Transamerica route to Oregon and 101 back down to LA. Adding to Tom and Deb’s bucket list???? Time will tell.

That’s how I would describe today.

It began and ended with hearing personal stories of Montana farm families and getting a better understanding of their concerns and their day-to-day lives.

When we were checking out of our campsite at Steamboat Dry Goods we asked Alice how the Dry Goods store came to be.

One story led to another and we found out Alice and her husband farm a very large ranch 15 miles away from the store. She explained what family farming is like, the economics of it, how the Montana drought last summer affected their crops and how tariffs might affect profit margins this year. Irrigation, insurance, the machinery, bank loans, and more.

I could have listened to Alice all day, especially since these are issues I don’t know a lot about but seem pretty important. To all of us. Do you like chick peas? They may have been grown in Montana. Lentils? Montana – and the list goes on.

Let’s just say I’ve added Alice, her family and all farmers to my prayer list.

So now for the end of the night, the other bookend.

When is the last time you handed someone a hundred dollar bill to support a cause you learned about only 15 minutes before?

This happened to us last night at the Circle City Park. Tom and I had just set up camp and were beginning our evening routine when Kevin stopped by to chat. He said he was meeting his “hay crew” in a bit to bale hay that night – apparently this is the best time to bale hay in Montana.

He was curious about our bike ride and we gave him the deets. He was particularly interested in Back on My Feet and their work with veterans.

Soon after his “hay crew” showed up. It was his beautiful wife Dawn, and their five children. The eldest sons, David and Donavan were meeting dad at city park to work all night. Dawn stayed behind to play with the children at the park before returning home.

This family visited with us for some time and it’s hard for me to explain how special they are.

This family. Salt of the earth. Good solid, faith filled folks who shared their stories with us and were interested in what we were doing. Again, the intentions they shared… on the prayer list.

Haha in case anyone is interested I keep a Google spreadsheet of everyone’s request so I don’t forget.

Back to our family, Kevin and Dawn, I don’t know your last names, and I was only able to give you a quick technology lesson about accessing our blog but know that you inspired us in BIG ways. Thank you.

And your idea of charity? It’s bold. And that’s something I need to practice more of. Bold charity.

Oh and about the riding, although it was a shorter day of only 50 miles, the rollers (over 2,000 feet worth) and the steady headwind wore us down a little. However we stopped more and ate more so all was well.

There were no “hangries” today for me but I almost threw a rock at Tom when I climbed to the top of a rise and found he’d gotten got his chair out and was sitting by the side of the road catching up on email waiting for me. And that was early on at mile six! 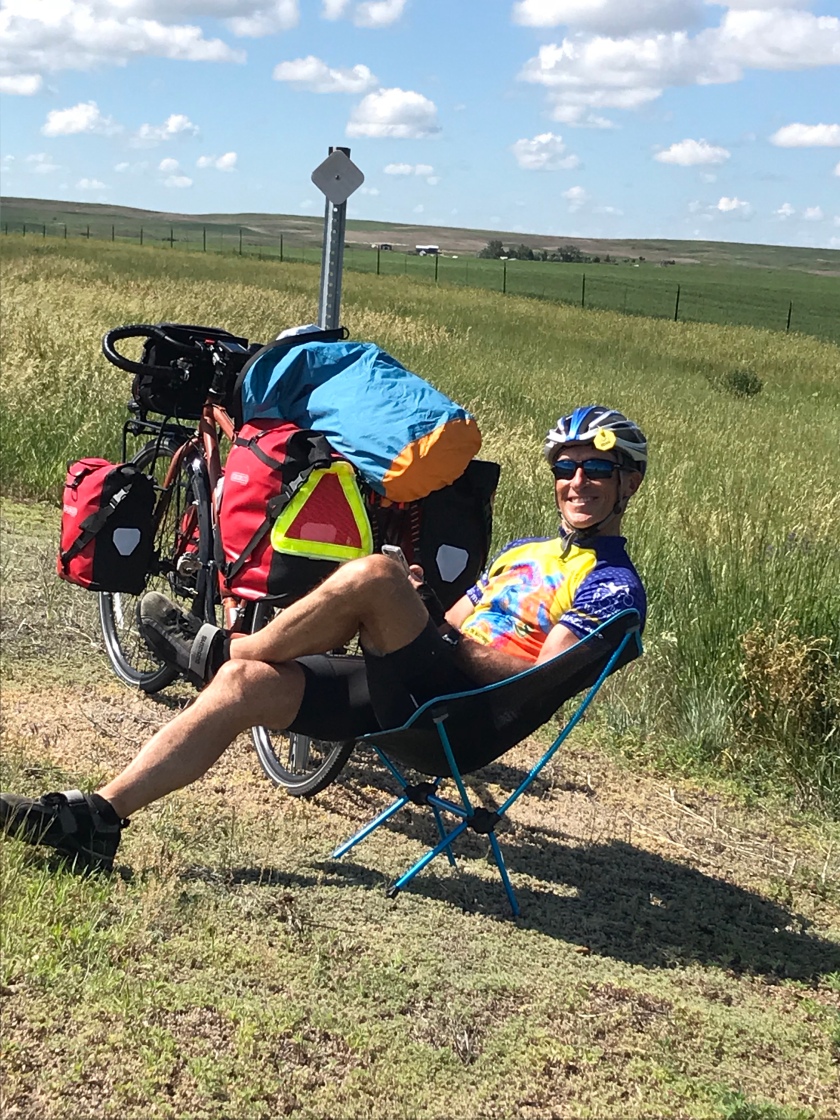 Between that and taking my pic when I fell asleep with the phone in my hand calls for action on my part. Watch out, Tom!

We crossed the mighty Missouri River today and Tom auditioned for a new job and danced a jig (I believe that puts him at three jigs, Mikey). 😊

Shortly after our picnic lunch next to the audition location we realized we were about out of water. Every ready Tom went to scout out some water and met Aaron and Lindsey who were eager to help. Seriously these Montanans are uber nice.

After a burger and grocery shopping we called the sheriff about camping in the city park and it was no problem.

We are ready for a longer riding day tomorrow!